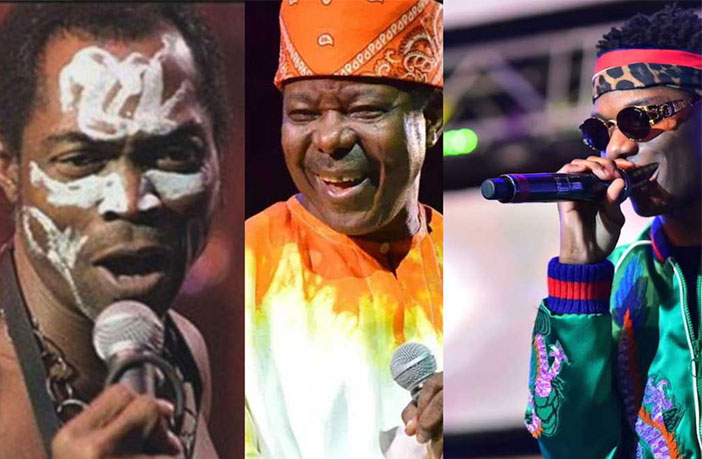 Was there any war? Were there wars? It was difficult as it is still unclear today, to say there were musical wars, particularly on the air waves.  But let’s laugh over some, and also analyse their results.

I am not really sure that the late Rex Lawson took marijuana, but it was well known that Fela started with Mirinda soft drink. The story was that educated Fela was so jealous of Rex Lawson’s massive popularity, powered majorly by the defunct NBC in its daily contents.

Fela had his Koola Lobitos, right, but was very uncomfortable with Rex Lawson who was better known in the nearly identical brand of music they played. Perhaps, instead of a positive research into his own music, he did the unthinkable. One day, he went to Rex Lawson’s house to challenge him to a music duel, calling him “Amugbo” in the process.

The duel did not take place, but Fela ended up a hemp smoker and a propagator of it. But that’s a diversion. Fela went into his positive memory, just a little later.  One day, his research which included a journey into late James Brown’s soul music, produced what he never thought of, and he was to shout “Eureka” to EMI Records, “Jeun Koku” was produced, Afrobeat was born, and the journey of Nigeria’s greatest musician to stardom kicked off. Until Fela went into political songs, his music made the first list of the radio stations. Even then, the political songs did not hit the air waves but the streets because there were no private broadcast stations at that time and Fela was already a troublesome enigma. One thing came out of this war, if there was a war, Rex Lawson who died shortly after the Nigeria Civil war in a ghastly auto crash, lives forever in our minds with his evergreen works. And Fela made Nigeria proud to become the first world-class musician.

The story of King Sunny Ade and Ebenezer Obey is even more thrilling. The two started almost about the same time, the latter a little earlier. But they were both struggling with identities on the air waves, and probably did not immediately get the fact that they were toying with other musicians’ ideas.

While Obey’s early works had touches of legendary I.K Dairo and Orlando Owoh, Sunny Ade was all weather music, with more focus on Tunde Nightingale. He actually started as Sunny Adex and His All Weather Band. His first record, “Alanu Loluwa” sold a terrible fifteen copies, but Sunny was dancing about the town because of the appreciable level of the air appeal it enjoyed.

Then the “war”, which was actually a product of visible levels of popularity on air, and by extension, among fans. Theirs, was actually a war in the true sense of it, but believe it as imaginary, because a settlement was arranged for them by the Late I.K Dairo and Late Adeolu Akinsanya.

Before the settlement, however, the two had not-so-smooth experiences in their efforts to carve out individual, unique styles. The results; a new Ebenezer Obey with “Board Member” and a new Sunny Ade with “Ile Labo Sinmi oko” two great works released about the same time with massive support on the air waves.

Even after the first settlement of their “war”, we still heard such songs as “Orin toni tumo, orin tomogbon wa”,  “Egbon ngbo kira kira”, “Let them say” and “Aso ija mi tiya”.

To put it properly, WNTV was at the centre of this, and the abattoir of the wars. This is where most Nigeria artistes cut their teeth to stardom. Name them: Babasala, Duro ladipo, Ogunmola, Ogungbe, I.sho Pepper, Fela, Roy Chicago, Victor Olaiya, I.K Dairo, King Sunny Ade, Ebenezer Obey, Dele Abiodun, Pick Peters, all of them and others.

And the staff had their preferences, which kept the “war” active. The most noticeable of these “war” on air was Ebenezer Obey and Sunny Ade before his crowning. There was a story of how a committee on the monthly musical shows and presentation almost divided the house, and how internal political dexterity or expertise in public relations were deployed to let the two dominate the air waves on a semi permanent basis.

And let me digress to a funny, but significant event, few years ago. One day, on my way to Ibadan from Lagos, I assisted to take KSA and Dele Abiodun to the venue of a Juju Band Leaders Association event. Already on sit were: Late Fatai Rolling Dollar, Ebenezer Obey and Pick Peters. A re-arrangement was made to allow KSA sit with Obey while Dele Abiodun sat with Peters.

Immediately, my mind went into history. The only one missing here was Babasala who was no longer a musician. A sitting row featuring, Rolling Dollars, (Obey’s former mentor), Obey, KSA, Dele Abiodun and Pick Peters was a delight but the young journalists covering the event didn’t pick this. I actually called Tope Olukole’s attention to this, explaining to him that these are the “karambanis” of our music scene in the 70’s, beginning from middle of 60’s.

There was a story that was not ascertained; that Obey left with some members of Fatai’s band when he was forming his own, and that Sunny Ade took Bob Aladeniyi, the only one that did not go with Obey. Was this true? In any case, we are still talking of wars, such as the one between Obey and Sunny Ade on one hand, Dele Abiodun and Pick Peters on the other.

Today, however, we are witnesses to glorious careers of the two, spanning some fifty years, propagating Nigeria’s cultural juju music to the world through identifiable individual brands.

Can we visit fuji music and the “war lords” who eventually stabilised the brand as one of Nigeria’s respected cultural music? Great Late Sikiru Ayinde Barrister and dynamic Kolyinton Ayinla, were friends before they became musical enemies.

And again, the quality of supports from the air waves triggered researches into their individual music. And they chose god fathers.  Barrister chose Ebenezer Obey while Kolyinton picked KSA. Not too funny!

Real or imaginary, the war was settled. In 1983, I had an interview with the Late Barrister where he said “war times were tough”. In his opinion, “Omohun a maa bu nyan”, referring to Kolyinton’s prowess in abusive songs. Notably, however, the two gave us, stable individual brands and qualitative fuji music.

But was there really any war? Not any, but musical competitions that were part of Nigeria’s history to greatness and importance in world’s cultural music. Competitions breed quality, and quality breeds greatness. So we can still enjoy the war on the air waves as our new generation artistes- Wizkid, Davido, Olamide etc. inherit the “war”. Luckily they push themselves into innovations, propelled by the “war” among them, to make Nigeria great with their brands of hip-pop music.

Broadcasting: For The Hardworking Only