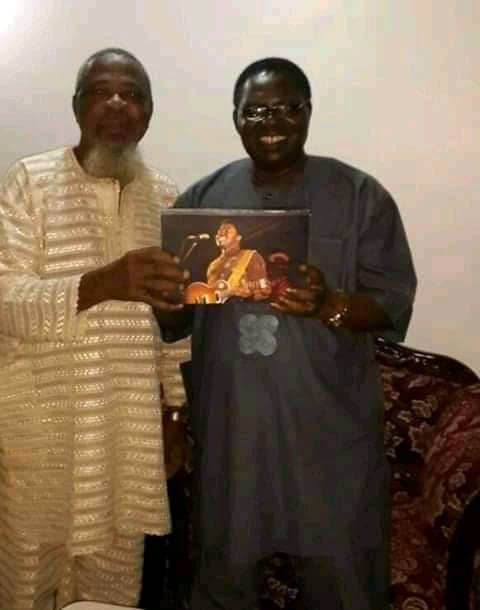 Paper Delivered by Bimbo Esho, at the University of Lagos recently.

Music preservation is an act of preserving and maintaining art found throughout the ages; be it sculpture, paintings, books, etc.

Most people who are preservationist usually first start as collectors. Good example is a renowned music collector in Nigeria Mr Femi Esho, Chairman of Evergreen Musical Company who owns the largest collection of music of yesteryears in Nigeria and Omoba Yemisi Shyllon founder of OYASAF who has the largest work of art in Nigeria today and whose Museum is situated at Pan Atlantic University, Lagos.

Femi Esho started his collection of musical works since the age of twelve. It started as a passion and love for music. His passion took him round Nigeria and he moved with the biggest names in Nigeria music industry. Today he is acclaimed as the largest collector of music of yesteryears in Nigeria with over 100,000 original vinyls of the works of musicians from all over the world particularly those in Africa. Also his Lagos office has overtime become a beehive of activities where researchers, musicians, students, etc all come to learn about Nigerian Music Heritage. In his Lagos office are original works of most of  Nigerian musicians some of whom he owns copyright to their works also on display in his heritage Office are  musical instruments like Gramophone of 100 years, Reel to Reel, Turntable, etc.

It is good to know that collectors overtime become preservationist as they think deeply about ways to safeguard most of their collected works for posterity. Sometimes they are seen as performing surgical operation on the piece of music/art in their custody. I remember few years back while discussing with Mr. Femi Esho, my dad. He told me of a most painful experience he has had as a collector. I am sure you will also laugh when you hear this story. He said while sorting out his many collections, one of the 78rpm record plates fell and broke into pieces, Guess what!! He said tears rolled down from his eyes. One may wonder why such display of emotions but for him he believes he has lost a heritage and an entire musical work that may never be found again.

Now back to the focus of the day. In explaining the preservation of our music I will love to split this topic into 3

3) Need for preservation of our Musical Heritage.

In explaining musical storage device and how it has been improved on over the years we will start by tracing back to over 3,400 years ago when the first musical form was discovered in Syria during excavation process. The archaeological finding was a hymn inscribed on clay tablet. This has since been transcribed and put into song. We can find that song on YouTube.

While discussing this mention must be made of the earliest musical instruments like the Lyre which is 1400 BC and the Neanderthal flute which has been estimated at over 60,000 years.

Coming back to Nigeria historical Research confirms Canon Jesse Ransome Kuti, Fela Kuti’s grandfather’s songs as the first to be released in Nigeria on Vinyl in the year 1925 under Zonophone record label. In understanding Zonophone please note it was not really a company per se but it name applied to records and machines (Talking Machines). Years ago people always thought it was the dog on the gramophone that sang. The technology of the Gramophone was introduced in, 1887. The Gramophone was used to play what was known as the 78rmp plate and also known as breakable plates. In 1920 the reel to reel was introduced. Later in 1948 technology continued to improve hence the introduction of 33 RPM records from Colombia Records. Then we had turntable to play this. In 1958 the Cassette player was invented then later in 1982 the invention of CDs. For us that are collectors I can say that the CD system has been like the poorest storage System. Once the CDs scratches it loses its relevance and starts to skip during play. Sometimes the musical content can vamoose sorry with my word, lol, leaving the CD empty. The other devices are relatively okay and have been able to stand the test of time especially if not exposed to heat. The MP3 Project began in 1977 but first put into use in 1998 according to research. The digital process allowed songs from earlier mention storage facilities to be converted to MP3 then stored on hard drive and computers. There is reservation for the digital era because in a bid for preservation of the original works as old as 100 years some end up losing the original sound texture including original local musical instruments used in the production while trying to eradicate noise and scratches. There is no gainsaying that the digital age has helped musicians particularly contemporary ones in selling their music around the world unlike the sale of vinyl and cassettes which required face to face purchase. Now Artistes can connect to their fans easily through streaming of their works on different platforms online like Amazon, iTunes, Boomplay, etc.

Global Music Vault are trying new technology that will help keep music for 10,000 years on a platter stem technology from a Microsoft research project dubbed project silica which uses recent discoveries in ultrafast laser optics according to them the glass is capable of holding over 20,000 songs for around 10,000 years.

Need for Preservation of our Musical Heritage

There is need to preserve our musical heritage to avoid distortion of original lyrics. Unavailability of our music will cause young minds to embrace foreign cultures that are available. We learn our cultures through music and allowing its extinction is at our own detriment. We all have noticed that contemporary music nourishes itself from older music traditions many we will notice in the songs remix of the present age. The loss of our musical heritage will mean the loss of our unique stories that carries mythologies, records of our ancestors, taboos, social norms, etc.