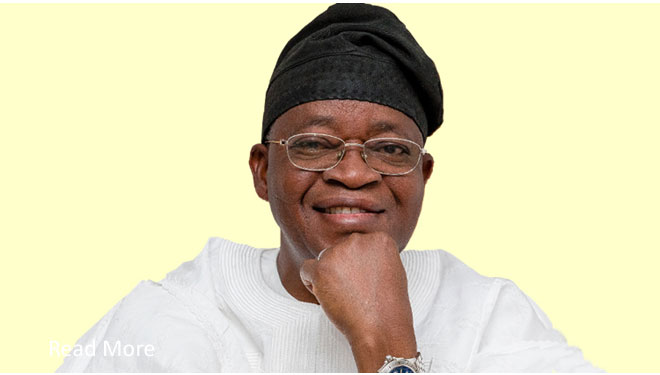 These rumours, sad and mean, that two people died, killed by Governor Adegboyega Oyetola’s convoy in the tragic melee that followed the attack of the Governor’s life are untrue. Totally so.

The Governor got out his car in Alekuwodo, trekked to Olaiya junction and when the armed thugs started shooting  at him, he drove towards Abere and back to the Government House.

According to reports, the first casualty of the day died around 12.30pm, long before the Governor left the Government House. He died of injuries he sustained in a motor bike accident. It is evil to even think the Governor or his convoy was anywhere near where the poor man died.

The second person was reportedly shot at Oke Ayepe area at about 4.30pm.

The Governor was back in the Government House by 4.05pm.  Bullet-ridden vehicles, cracked windscreens and axed bonnets and all. We were all shaken by the experience.

I grew up in Osun State. I had my secondary education here. Alekuwodo, Olaiya junction are two points far apart from Oke Ayepe. My secondary education I had at Baptist Girls High School  and I wrote my JAMB examination in St Charles Grammar School which was on the other side of town in Oke Ayepe axis. So, I know these places. Google map says the distance between the venue of the protest and Oke Ayepe is 4.8km.  The accusation that the Governor’s convoy went through Oke Ayepe to get to Government House is like accusing a man in Ikeja of shooting another in Ijora in Lagos. It’s both evil and mischievous.

ALSO READ:   Broadcasting: Listenership and Viewership From The Diaspora

I urge you to  disregard the video going round that the Governor’s convoy ‘killed’ anybody. Anybody who knows Osogbo knows Oke Ayepe is neither  on the way to Alekuwodo nor Government House. And the two deaths had nothing to do with the attempt on the Governor’s life. The people who tried to kill Governor Oyetola had it all figured out.

Governor Oyetola has ordered a speedy investigation into the circumstances that led to the death of the two men.

It is unfair to attempt to kill a man and when you do not succeed, to turn around to accuse him of being in a convoy that caused the death of others. It is mean and ungodly.

In all, Governor Oyetola is a man, calm, patient and measured. He’s not given to propaganda. Those determined to pull him down must remember that there is a day called tomorrow.

ECOMOG: A Call To Duty, But Covering War Is Scary – Ex–FRCN Director